We made it back to the States on Christmas Eve without any problems! Our luggage arrived and everything, praise the Lord! So, we'll spend the holidays with family and figure out what God has for us next. We tentatively plan to work and begin raising a son in the U.S. for the next couple of years, and then see where God takes us.

Thanks so much for your prayers and support! We couldn't have made it to Moldova and back without them! Please keep in touch!

(Aside: Justin has written a lengthy debriefing about his time in Moldova for his sponsoring organization, BPN. It includes his observations on the church, the economy, politics, and Business as Missions overall. If you're interested in reading a public version, just send him an email: justintapp@pobox.com).

We wish you all a VERY Merry Christmas and Happy New Year!
Posted by JTapp at 3:38 PM 47 comments:

Our last day in Moldova! (Justin)

It's hard to believe that the time has come to say goodbye! We've had such an incredible time here, learned so much, and made so many great friends. We're very thankful for this experience!

We've had some tough goodbyes in the past couple days, including a mini going away party at the Invest-Credit office.

Vasile and I met online this morning and he showed me his great strides the past week. The site is looking great! The difficult administration side of the site is finally complete, and in the next week the first public version should be uploaded. It is going to be higher-quality than the secular sites of its kind here.
He's worked day and night this week to get things done. We're quite thankful for him, and for your prayers for him. We will leave him with a monetary gift of the small amount of donor funds we have left. We think that's a good use of our remaining funds.

Joni has worked hard to pack everything, and we appear to be under the limit in our weight allotment.

Today we will say goodbye to our host landlords. They will come over and pray with us and say our goodbyes. They've been very kind to us.

Our travel itinerary is:

**We will have an overnight stay in Vienna. This was unintentional; we couldn't find a reasonably cheap plane ticket without an overnight layover and this Vienna leg was the cheapest. We've tried to save as much money in travel as possible.

We will post again when we get back to the States.

Please lift us up as we travel home for safety, connections, and luggage arriving! Thanks so much for your prayers and support over these five+ months!
Posted by JTapp at 3:08 AM 1 comment:

I just wanted to give a quick report on the doctor's appointment we had on Thursday - our last appointment in Moldova! They did several tests and I spent a total of 3 hours there, given the 2 1/2 hours I spent in the waiting room! However, they officially declared me to be healthy and the baby is healthy, and they wished us the best of luck for our future. Overall, my experience with Moldovan medicine has been a positive one, although I'm glad to not have to continue it any longer - mainly because I'd prefer having a primary caregiver whose first language and culture are the same as mine! Praise the Lord both for our health and our positive experiences here!

The title of my post is referring to the fact that we're less than 48 hours from departure! The next two days are going to be really full for us - me with packing and Justin with finishing up his projects. Neither of us made as much progress on those things in the past couple of days as we wanted to, so please pray for God to multiply our time and give us wisdom and peace on dealing with everything that comes up!
Posted by Joni at 6:40 PM No comments:

We're in our final week in Moldova. Here's what it looks like:

1. Vasile is working hard on completing the behind-the-scenes admin stuff on the website and getting it set up like we want. I anxiously wait for his results. He's busy with exams, work, and other things, so please pray for him to have time and energy to get the brunt of the job done this week!

The final version of the site will not be completed by Sunday, so I will be staying in touch via e-mail and Skype once we return to the U.S. Hopefully, the vast majority of the site will be finished and all that will be needed is individual information from churches, translation in Russian/Romanian, and a willing Administrator to manage the site once it's completed. Please pray for these 3 things to be completed!

2. Joni is packing things up. That's a tough job, figuring out what to take and what to leave. Please pray for her stress level and energy.

3. Saying goodbyes. We've got several people that we need to say special goodbyes to. Our landlords, our co-workers, our friends, etc. Please pray that all this goes well and that we don't make any cultural "faux pas" by leaving someone out!

Thanks so much for your prayers and support. We'll let you know how it goes!
Posted by JTapp at 11:15 AM No comments:

Yesterday afternoon, Joni took this picture of snow falling on our gate.

We snapped this picture this morning from the street. You can see the accumulation! And then it continued snowing most of the day. 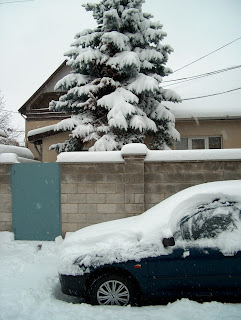 This is looking down our street. The snow makes everything look so much nicer, and is a lot of fun. 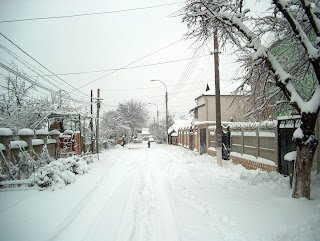 The problem is that they do not salt, sand, or plow the roads in Chisinau. So, the sardine-can packed minibuses slip and slide trying to gain traction on hills and such. It makes the ride across down much more interesting, especially at night as roads become sheets of solid ice! 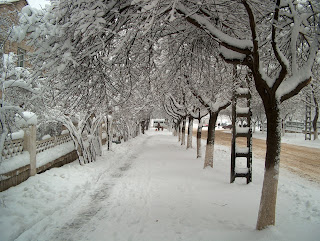 Today we attended an international craft fair hosted by the International Women's Club. I think every humanitarian and international aid organization was represented, along with representatives from over a dozen countries. International foods, music, dancing, crafts, and information about what each organization is doing. The proceeds go to various charities here in Moldova. You can read more about it here.

One of the highlights was that Peace Corps and a few other American groups were selling American books, magazines, movies, and even American food-- Campbell's Soup, Hungry Jack pancake mix, etc. That was a very big deal to the large number of ex-pats who were there.

There were also Moldovan schoolchildren performing traditional songs and dances, accompanied by Santa Claus. They went around to each booth and sang carols and blessings. Santa Claus was pretty terrifying. Joni got this good pic of him loudly bringing Season's Greetings to some foreigner. 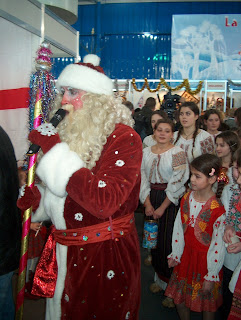 The snow was a blessing. Overall, it was a great day and we felt like we contributed to some good causes. It's sad to think we'll be leaving here in a week; the time sure has flown.
Posted by JTapp at 2:31 PM No comments:

Last night we attended a "Town Hall Meeting" for Americans at the U.S. Ambassador's residence. I asked the Ambassador what his office was doing to foster better relations between the Chisinau Mayor's office and the national government. He joked a little about the Christmas tree controversy, but stated that he was doing what he could to convince both sides that cooperation with the opposition was essential to good governance.
He also gave some background into why both sides dislike each other, and says this is mainly a problem in the big cities like Chisinau, and not in the countryside.

On Wednesday a group of 50-100 protestors, mainly youth but including the Mayor and other officials, took to the National Square.

"Many of them brought artificial fur trees, which were put within the fenced place, designed for the chief New Year tree of the country. Then during several minutes the young people were standing silently and holding pictures of the European capital cities, where the New Year trees had been already installed. After this they left the square peacefully. The protesters placed a symbolic small fir tree in the place where the Christmas tree once stood with baubles conveying such messages as “Right to Personal Freedom”, “Right to Security”, “Right to Free Expression”, “Freedom of Thought, Conscience and Religion” etc." 
Apparently, the controversy contributed to quite an ugly day in the Moldovan Parliament. As we returned from the Town Hall meeting last night, we passed by the original fir tree (which was moved off the Square) and saw it still being guarded by several policemen.
Posted by JTapp at 4:19 AM No comments:

...look like the Moldovans do! It's fun here now that the weather has turned very cold, because everyone's pulling out their serious winter gear. Fur hats, scarves, long leather coats, you name it. My missionary friend, Nancy Russell, loaned me this leather coat so I could stay warm this winter, but I must say it also makes me VERY stylish... 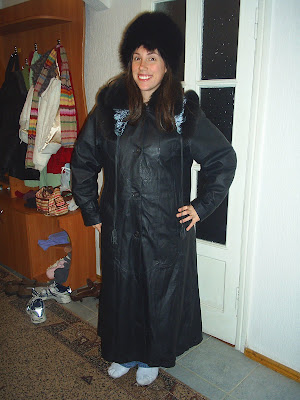 It has a zip-in fur lining, a fur neck ruff, and a thick fur-lined hood. No getting cold in this dude! The fur hat was just a silly addition at Kelly's house where we took the picture. Even if I wanted to wear it, I couldn't because it was too small for my head! It made for one nice picture, though! And yes, people really DO walk around looking like this on cold days here.
Posted by Joni at 10:12 AM No comments:

Justin and Joni at their First Moldovan Wedding 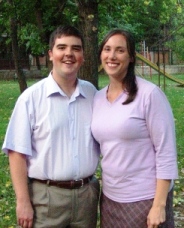 We are working with the Christian Agency for Micro Enterprise Development (CAMED) in Moldova. This agency provides micro and larger loans to small and medium-sized enterprises there, as well as provides Biblically-principled training for aspiring entrepreneurs.
The agency sponsoring us is Business Professional Network, an international group of Christian businesspeople who desire to help local economies grow through business development.

How you can help

We have been raising our support through the donations of individuals and churches. Although we did reach our original financial goal, we will always have unexpected expenses that we didn't plan for, and we will be accepting donations during our whole term here in Moldova. All donations are tax-deductible. You can make your donation on our behalf to Business Professional Network.

Be sure to attach a note or letter to the check designating that the donation is for "Justin and Joni Tapp to Moldova."

You can also help us by praying for us! We'll update this blog with requests regularly. Thanks so much for your support!